Holden Farms’ history can be traced back to 1876 when John and Emma Holden moved their family to a small farm on Wall Street on the east side of Northfield, Minnesota.

John and Emma eventually turned the farm over to son William and his wife Mathilda who continued farming at the Wall Street Farm throughout the early 1900s. William and Mathilda’s sons Carroll and Howard later became involved with the farm, with Howard eventually becoming sole owner.

Through the early 1940s, Howard continued his family’s farming tradition in a wide range of farming activities, including crop and dairy farming and turkey production. In 1939 at a Northfield dance, Howard met teacher Evelyn Allen, the daughter of renowned turkey breeders John and Amanda Allen from Radium, Minnesota. Howard and Evelyn were married in 1942.

Our heritage as a farm family is important to us. We try to honor that heritage every day in the way we work and live.” – Barry Holden

By the mid 1940s, Evelyn and Howard had begun to concentrate their efforts on turkey farming. Over the course of the next several years the couple had four sons, each of whom would eventually become involved in the family’s farming activities. Following Howard’s death in 1973, the four sons – John, Kent, Barry and Craig – expanded the turkey operation to include hog production, feed milling and fertilizer production.

Holden Farms grew throughout the 1980s as the four brothers pioneered some of the region’s first contract partner arrangements for hog production. In 1991, John and Craig sold their portions of the company to Kent and Barry, who assumed sole ownership responsibilities of the hog farming operation plus a portion of the turkey production venture.

Under Kent and Barry’s leadership – and with the farm’s focus now exclusively on hog and turkey production – Holden Farms flourished during the 1990s and 2000s. Today, Holden Farms operates three turkey farms, is a part owner in a turkey processing plant, owns 40,000 sows and has nearly 200 contract partners in the region. 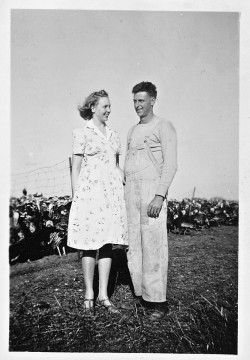 But while our growth has been significant, our family’s approach to responsible family farming is the same as it was at the Wall Street Farm in 1876: work hard, remain honest, and value the people, animals and land.